I moved again! This time, I've been transfered up to Wakkanai, the northernmost part of Hokkaido. If you look out from the shore, you can actually see Russia! My new companion is Murakami Chourou. He actually flew up to Japan with me from the MTC, so that's cool!
Traveling up here was actually a bit of an adventure (not much, but more interesting than usual). First off, getting from Hakodate to Wakkanai takes twelve hours by bus, which meant I was pretty much riding all day. To add up, we actually misunderstood our travel plans and had to take a later bus, pushing my arrival time an hour or two back! From there it went pretty smoothly, until the last stop when the bus driver almost left before I could get off (a member who came to give me a ride to the apartment saved me). That was pretty wild, overall.
Anyways, last Friday, the branch had a Halloween party which I had the privilege to dress up for (I started making a costume for the Hakodate Halloween party two weeks ago, and I was infinitely relieved when I learned that Wakkanai would have one, too)! We did some english games like Telephone, Charades and Pictionary, after which we had some refreshments while the kids beat up a piñata we made (I was well satisfied with the results). The members took many photos, so I'll be sending a Google Photos album link for those.
That's the bulk of this week. Hope everyone is doing great back home! Matta ne!
Photos:
https://photos.app.goo.gl/8jgWPrmCfDLVHUfBA


Sherwood Chourou was in Hakodate and is now in Wakkanai - the map below shows the locations.

We have once again arrived at the final week of the transfer! It's been a bumpy ride these last five weeks, but the last stretch looks like it'll be smoother. This week, we had splits, so I got to spend a day venting my English-withdrawal on my temporary companion. That was satisfying. That day, a cat followed us around for a bit and I named him Dave. Dave was goodly. I actually managed to get two decent contacts this weekend, which was a real boost from my previous stagnation of successful dendou.

Anyways, that's pretty much it. I wasn't able to get much in the way of pictures, but I found a fish sitting on a windowsill in an apartment, so I took a pic of that. Hope you all have a good week! Matta ne! 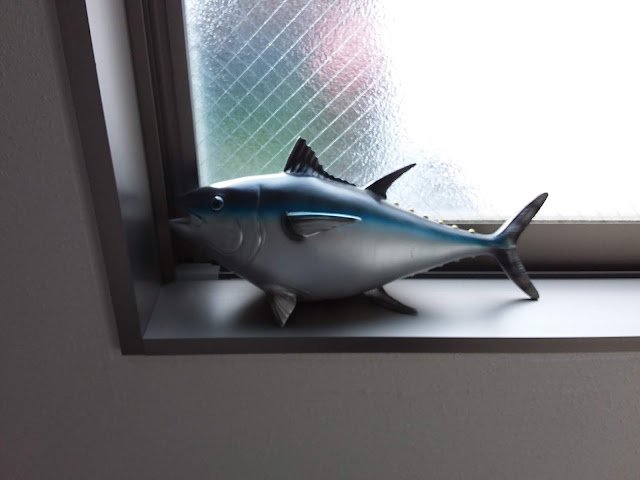 It's been a pretty uneventful week again. We watched general conference this weekend (which was fantastic) and a some simple lessons, but besides that, not all that much. For one of the lessons, though, we went up to a little kids amusement park thing. Apparently, it had Japan's oldest ferris wheel, which was pretty cool. There were also a bunch of little animal pens, including one with peafowls and one with a tanuki (Japanese raccoon dog). Unfortunately, this was late at night, so I wasn't able to get a good photo of any of them, but there was a cool lit-up fountain I did get a picture of.
Anyways, that's all I've got, sorry. Hope you all are still doing well and have a good week! Matta ne! 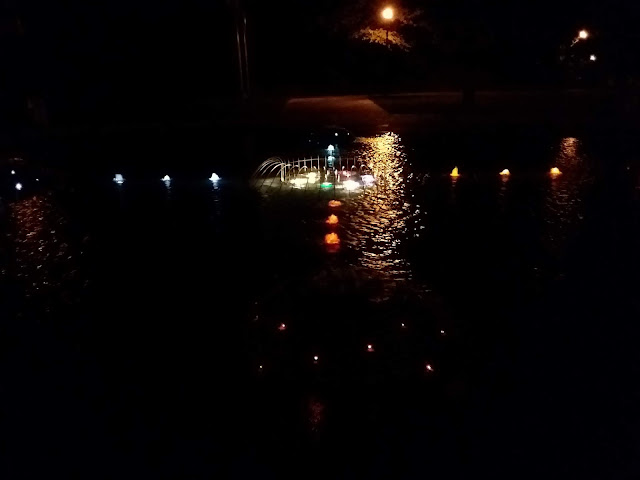 So I didn't mention in my previous email, but last week was zone conference (and zone pday, hence the late email). We talked about how important it is to have joy while out serving, because who's going to believe a pair of grumps know squat about God's Plan of Happiness? That gave me a bit of an extra boost this last week, which I'd say is a sign that it fulfilled its purpose.
As for zone pday, we did ultimate frisbee for a good bit and played "signs" a little for a mid-game break. For those who don't know signs, basically everyone sits in a circle with one person in the middle. The people in the circle use signals they made up and showed everyone earlier to pass around "the sign" while the person in the middle tries to tag the person who has it. It's very fun, and very crazy. We accidentally threw the frisbee into a river at one point. Luckily, a very friendly man came by and fished it up for us. We thoroughly thanked him and took the opportunity to tell him a snippet about the church (always be proselyting). That was a pretty good day.
Two days ago, we helped a grandma in the ward move into a new apartment. We had to screw in two curtain rods, but it was way more difficult than necessary because the only screwdriver we had was too short and thick to fit it the space we were working in. Afterwards, one of the brothers took us out to a shabu-shabu restaurant (kind of like a buffet where you boil your own meat). It was very delicious, and I took a pic for this email.
Yesterday, I got to meet one of our investigating friends for the first time! His name is Bobby, and he's from America (which helped me out infinitely). He seems really prepared, and though he isn't feeling ready to commit to baptism, I have a feeling he's well on the way to finding the truth. Please keep him in your prayers!
That roughly sums up my week. It's getting kinda chilly up here, so I'm having to pop out my sweaters (a concept fairly foreign to all my pals down in Arizonia). I hope you all are doing well, and have a good week! Matta ne!

Pics:
- ninjas need help with vending machines
- shabu-shabu
- me in a sweater 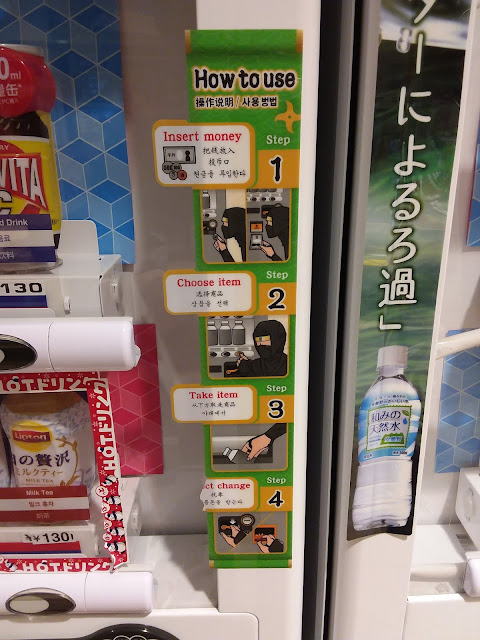 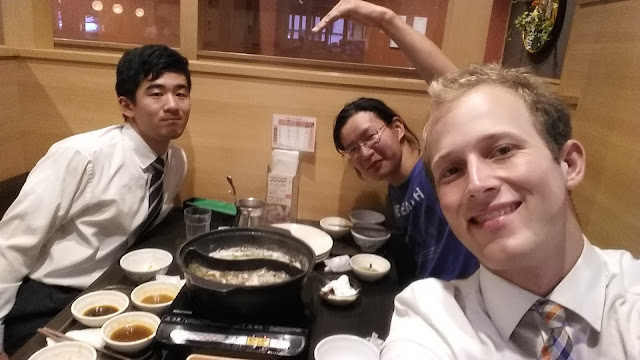 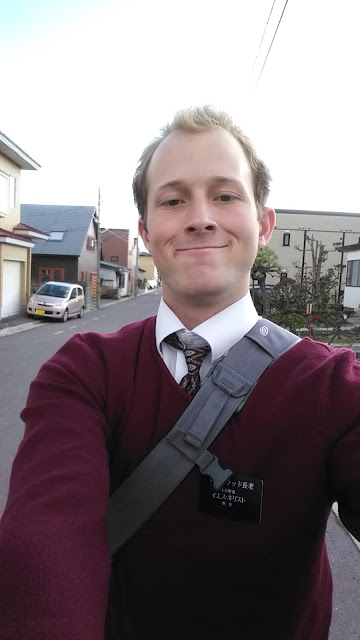 I've been in a bit of a funk these last few weeks, what with my first transfer out of Iwamizawa and with a Japanese companion, but I think I'm starting to get my grip again. I think my main issue was that I convinced myself that the onky correct way to do dendou (missionary work) was the way we did it in Iwamizawa, a false concept. That's the moral for this week, kids: don't get stuck on how things changed, just go with the flow and you'll do fine.
I actually have some stuff to share this time! I mentioned in last week's email that we saw many cats, but little did I know that more was to come that night. We were housing along this neighborhood when we got to an apartment. When we went inside, we saw a kitten hide behind some snow shovels. We kind of ignored in at first, but when we finished knocking doors there, we moved the shovels to shoo it back outside (there are many wild cats in Japan, and apparently people don't like them chilling in the apartments), but when we did, we found like five more kittens behind the same shovel! Upon being discovered, they all bolted out the door, except for one which tried to escape up the stairs. We followed that one up, and once it realized it was trapped, it jumped to the stairs behind us from about 5 feet up and scampered out! It was wild. I took a pic of the one that went upstairs, but the others were to quick.
On a less exciting note, I also found a bottle of Sprite in a convenience store. This might not sound all that noteworthy, except I haven't seen Sprite since getting to Japan and I was going through withdrawal. Also, today, I had a corn pizza. Yeah. Japan has weird pizzas. Finding a pepperoni pizza frankly takes a miracle (aka a Costco). Pics included.
That's all the time we have for today, folks! Hope you're all still intact and doing well! Matta ne! 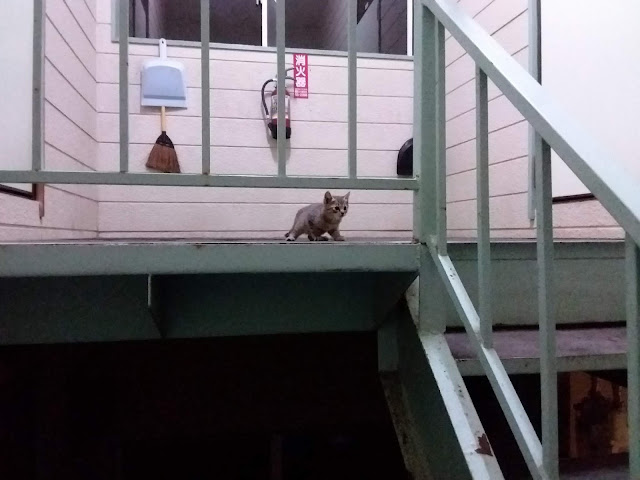 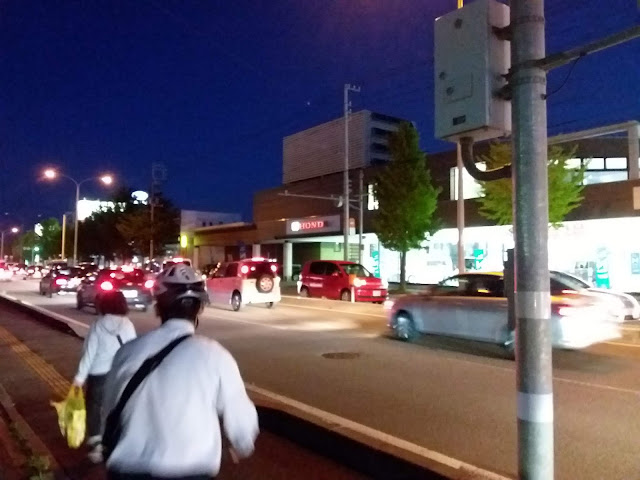 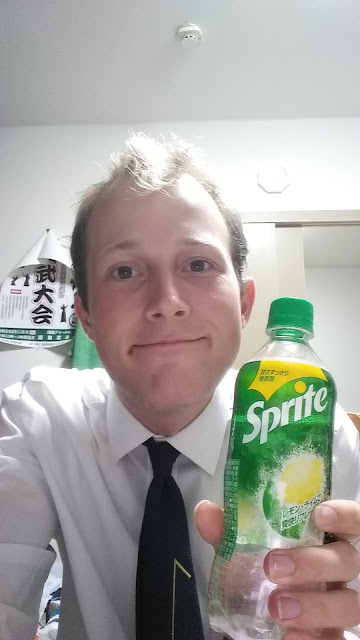 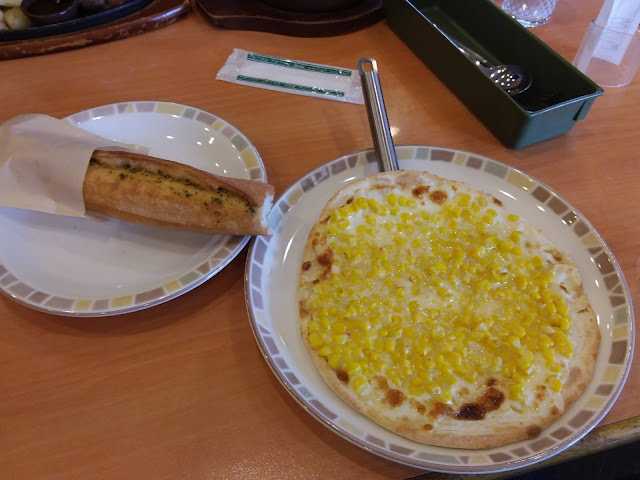