So this week's been a long one. On Tuesday we went on splits with the Sister Training Leaders in Fushimi-Inari and it was a good time. Maiwiriwiri Shimai and I found a bunch of cool people from China and we taught piano to this guy from Myanmar. Turns out explaining piano in Japanese is wayyyy muzukashii (difficult). Arigatou Hemi Chourou for being basically pera-pera (fluent) and knowing all the words for the different fingers. We ate gyouza for both lunch and dinner and I was a happy senkyoushi. I love gyouza.

We taught kids' eikawa this week and it was fun. We taught them all about family words and had them start making kiddo family trees. Mostly because teaching the alphabet and stuff is boring and this way we can dendo the moms with family history. Two birds one stone heyooo.

Also the other day we found a less-active family that our area book map had put in Cyprus of all places, but when we actually looked at the address we were like "wait a second that says Kyoto what" so we Google mapped it and we were right! They live in Kyoto! And we found their house! They're alive!!! But they weren't home so we didn't get to talk to them so slightly sad. But soon. Soon we will find them.

While we were up in Kyoto looking for these guys, we accidentally stumbled upon the most hipster cafe study spot I've seen in my whole life. It was called MTRL (I think it's supposed to be pronounced material) and the little cafe inside was just like "Fab Cafe. What do you fab?" and it was hilarious and great. What do you guys fab? Incidentally, their bagel sandwiches were way good.

Also y'all are probably wondering what I meant by "achievement get! new superpower unlocked". So fun story. While walking through Kyoto I was very tired and sad and just miserable and then I just kinda stopped in the middle of the sidewalk and cried because what else can you do when you're cold and sad and tired and can't speak Japanese? Well like five minutes later a squad of Jehovah's Witnesses appeared out of the mist and brought us to a warm laundromat and got us warm lemon drinks and were super nice to us and we just talked about ourselves and the Bible for like 20 minutes. It was a baby miracle. They were way nice. And then after we were warm again and not hating life they just kinda left and we have no idea where they went. Where did they come from? Where did they go? Where did you come from cotton-eyed Jehovah's Witnesses????? So yeah apparently I have the ability to summon an army of Jehovah's Witnesses now. Way nice people. We're really grateful for them.

Also other cool miracle, we had seven investigators at church yesterday! That's like a fifth of the people in the ward! We were so happy and the members were also so happy. God really is too good for us. Katsura is an area of miracles and I'm so glad to be here. 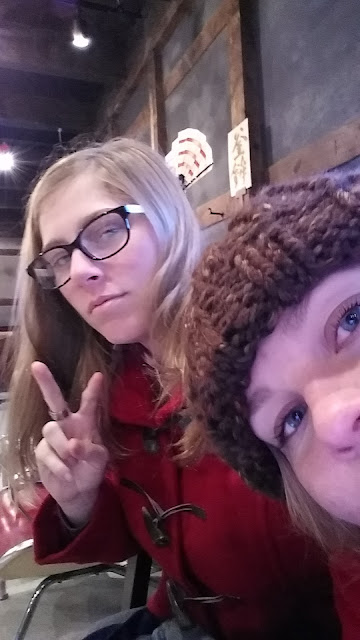 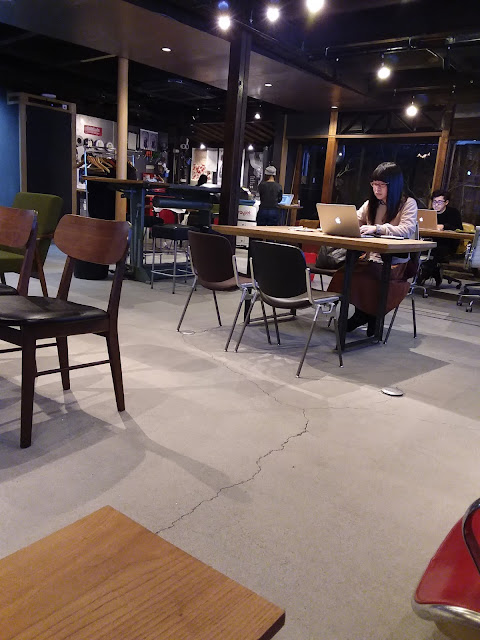 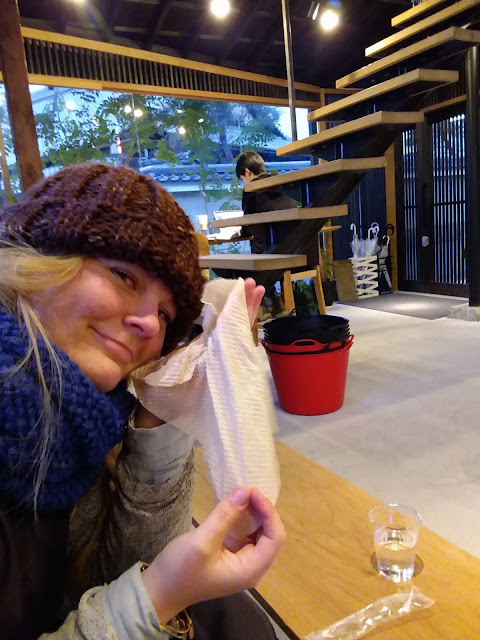 We saw actual grass. It was amazing. 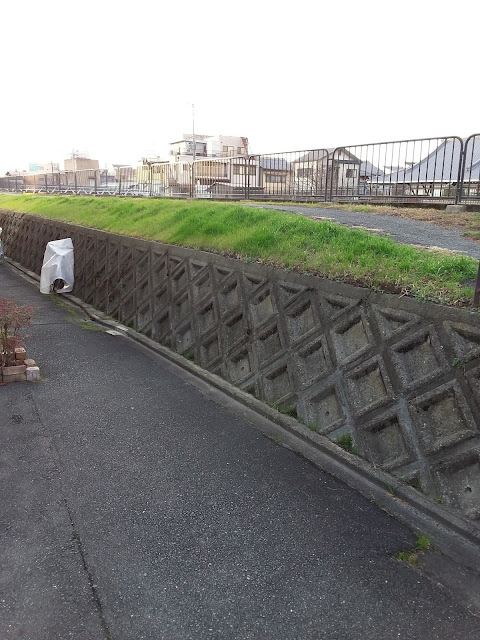 So Katsura area is a gonin now (五人, five people) because a new chourou, Eddington 長老,  joined Emerson 長老 and Slack 長老. He's chill and incidentally, he was one of my dai-senpai in the MTC. So that's a thing now. There's too many missionaries. We're like a fifth of the ward.

In other news, we went around to a couple hospitals looking for service opportunities, but alas we couldn't find any. Japan is very self reliant and nihonjin don't like onegai-ing (asking for favors) other people. Even when we ask its alwayss "no no its fine." They're all very humble and polite and don't want to put other people out in any way.

Also Thursday we had zone conference so that was way cool. President Smoot talked a lot about family history and the prophecies given to us about Japan. We've finally got lesson plans and tango (vocabulary) lists to practice for dendo-ing family history and we're way excited. We also played fun games as a part of the lessons from the zone leaders and the sister training leaders about improving dendo, and there were literal stacks of chourou-tachi. It was wild.

Shinji came to church again this week and it was way awesome. We've started calling him Kyoudai (brother) and he's way cool with it, it's so great. In our lesson he said he's been telling all his friends and coworkers about how he's been taking lessons from us and going to church. He's been dendo-ing on his own! It's unheard of! He's a literal miracle. We taught him about the creation, fall, and atonement, and he really liked it. The spirit was really strong in the lesson and he kept saying how he felt really warm and good about what we're teaching him. He's so cool! We're so blessed to get to see him progress.

Other than that the week has mostly just been us doing our best and going out and finding people. Until next week!

(P.S. Eaton 姉妹 gave me an intense awesome study quad pdf made by an old Seventy that expounds every verse of scripture in the entire standard works so if anyone wants that, hit me up)

1. Kyoto has Pokémon signs under all the lampposts and I found my precious sweet baby slowpoke. 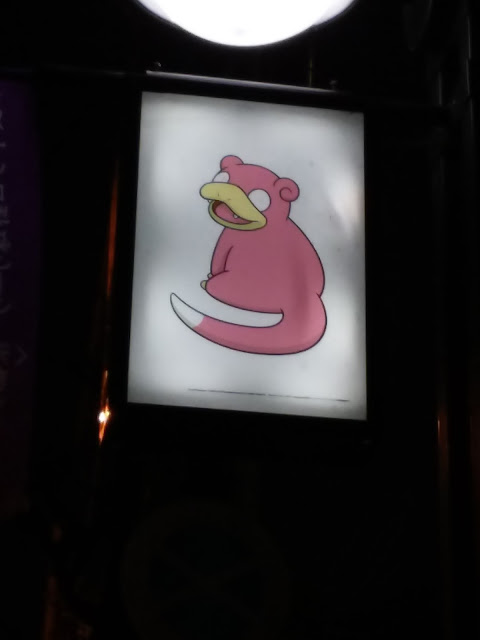 2. I found a cute Pokémon themed "Pocket Veggie" juice with Eevee in it in a Kyoto vending machine. (it was way oishii. Tasted like oranges and carrots) 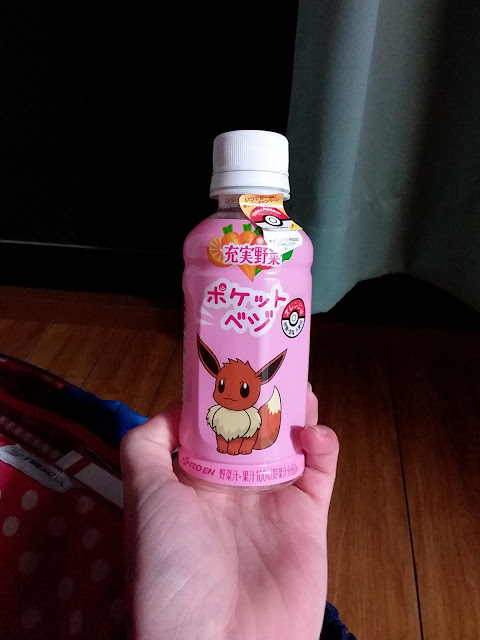 3. A cool jinja (shinto temple) on the way to visit Ono Shimai 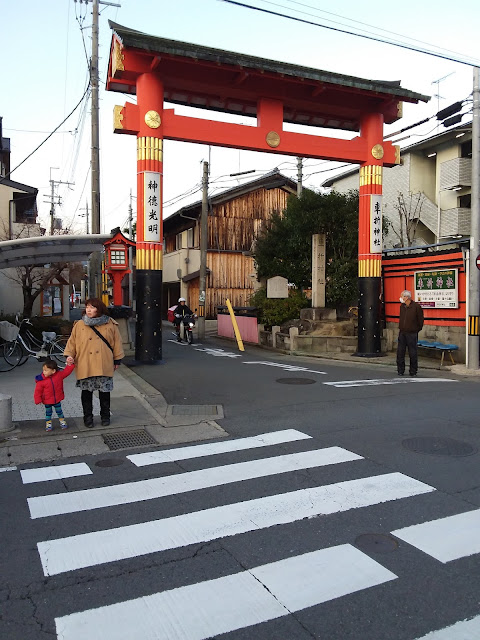 4. Catron Shimai and I got chocolate melon pan with chocolate chips and chocolate cream filling at the Lawson's near the Shimogamo church building. It was delicious. 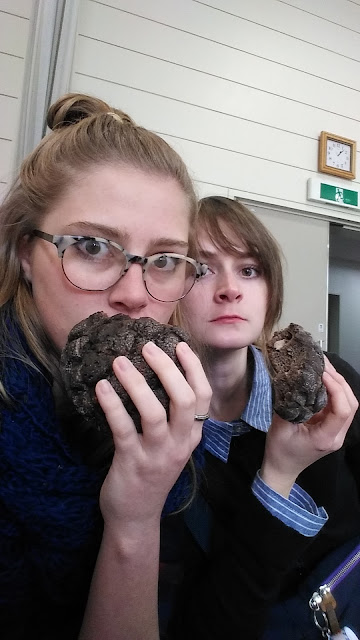 5. I'M THE WORST GOMEN HERE'S THE PICTURE OF THE CHRISTMAS BANNER FINALLY ARIGATOU MINASAN (People in our church ward (congregation) all wrote messages to Brittney on this banner that we mailed to her for Christmas) 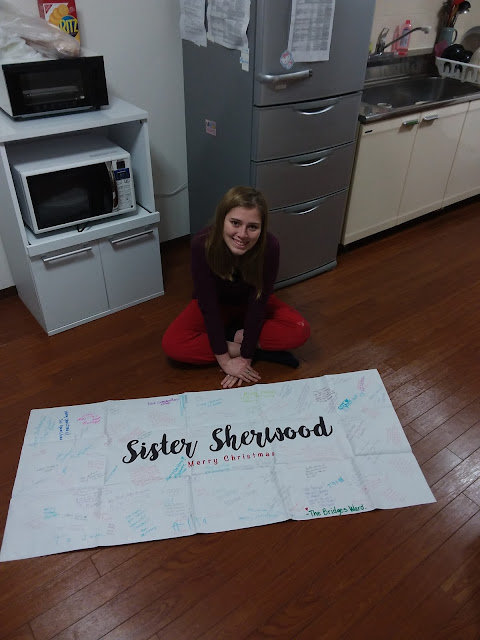 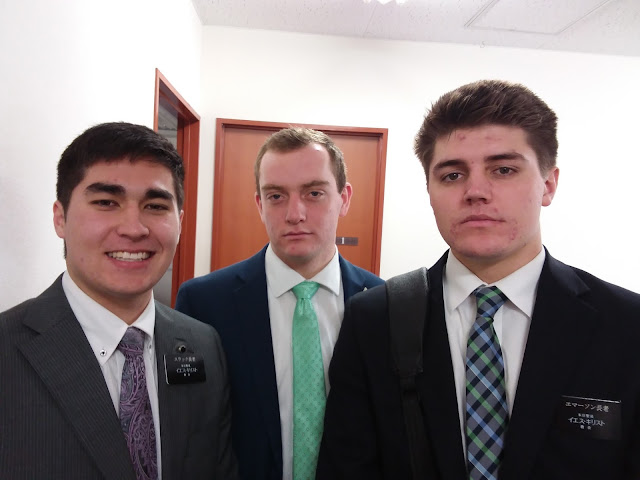 This week was good despite a tad bit of sickness up here in Katsura. Shinji and Tawarazaka-san are progressing rapidly and it's really a miracle. Shinji came to church again yesterday and we taught him the restoration. He said that he's open to finding out whether or not Joseph Smith really was a prophet and that he thinks that Joseph had admirable faith. He's also started to try and quit coffee all by himself! We haven't even mentioned the word of wisdom yet. He's just a star. He even wore a suit! It was really cool though because he said that he really loves how welcomed and loved Katsura ward makes him feel. It was wonderful. We feel like if he gets baptized, he'd be the kind of person to really strengthen the ward and bring them closer and help them be happier.

Tawarazaka-san is really cool because she just really wants to come closer to God and she has a real desire to read the Book of Mormon even though reading is hard for her. We taught her to pray and she was so ready to just go for it and pray twice a day, it was awesome. She understood what I was trying to say even though I was having a really hard time explaining in Japanese. We're really excited to invite her to church and help her make friends with the kain. We're really blessed to be able to teach these awesome people so we're ganbaruing as much as we can to be worthy to teach them. Katsura really is an area of miracles.

Also I made mochi at the mochitsuki (mochi making event) on Monday and it was way cool. Mostly though the week was fairly uneventful except for our investigators' lessons being awesome and me being sick for a day. Oh also Emerson Chourou had to spend a bunch of time at the dentist (poor guy) so we've been trying to help the chourou not die of pain and business. In general though it's just been freezing. It snowed on Sunday and no one was happy about it because biking on icy roads is way abunai (dangerous). Pretty sure my hands are gonna fall off. But hey if being cold is what we gotta do to help Shinji and Tawarazaka-san be awesome then ganbarimasu.

Love you all!
Sherwood 姉妹❤️ 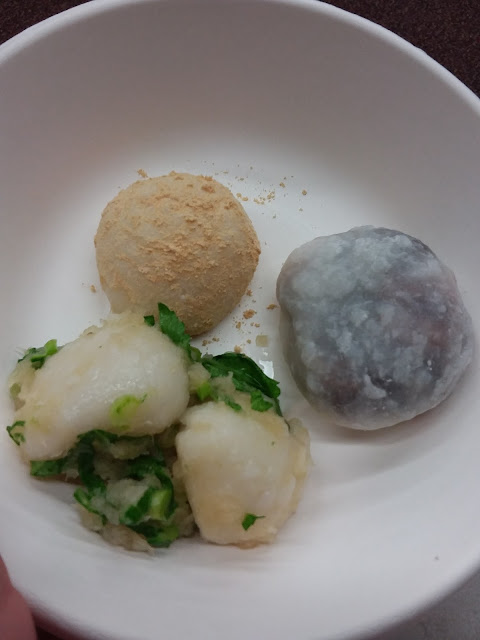 My face because mom wanted more pictures of my face 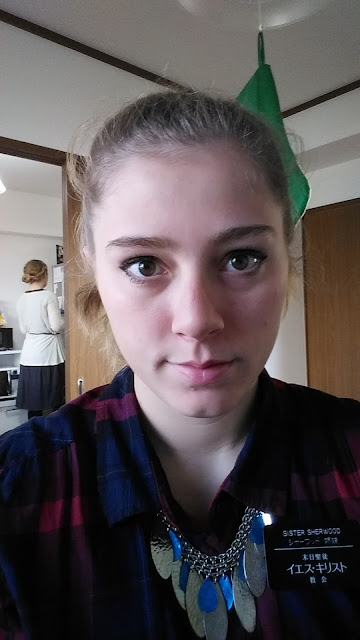 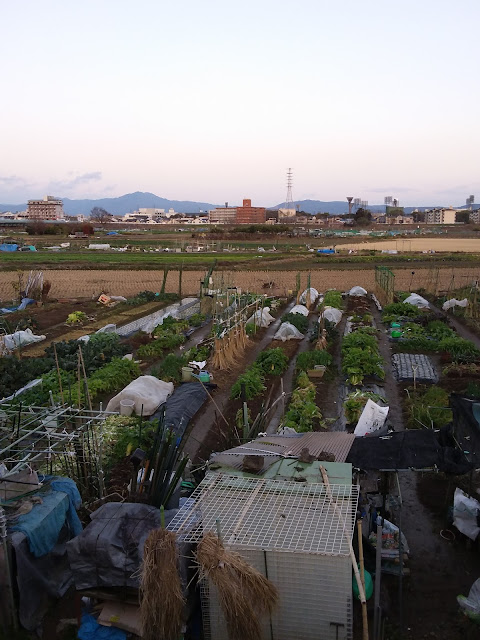 I drew Bishop Okunishi. He's like a sweet kind shy version of President Hinckley we love him 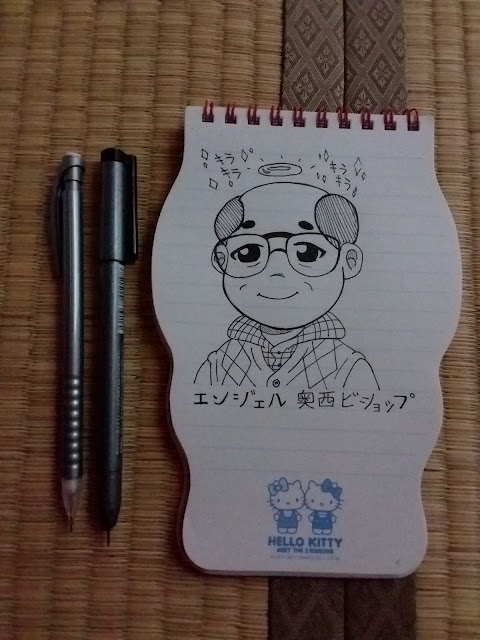 Me hammering the mochi 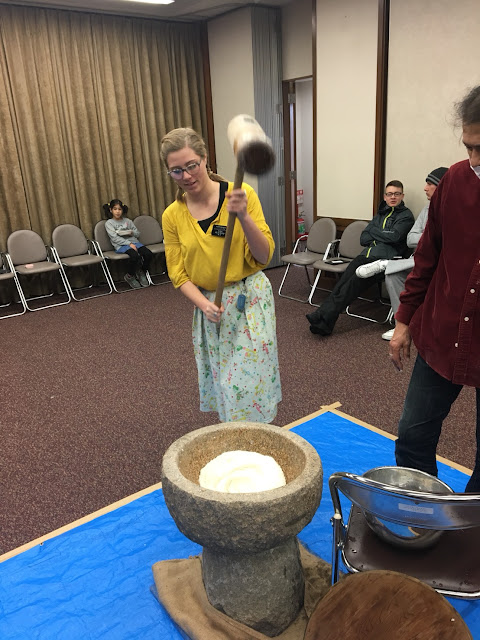 The yonnin (the four of us) at the Okunishis house 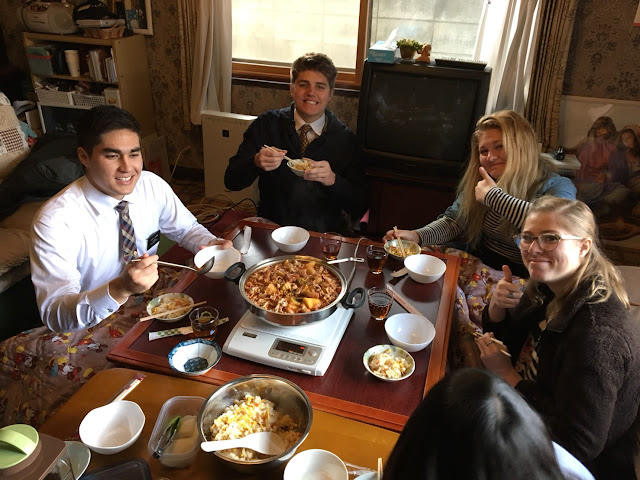 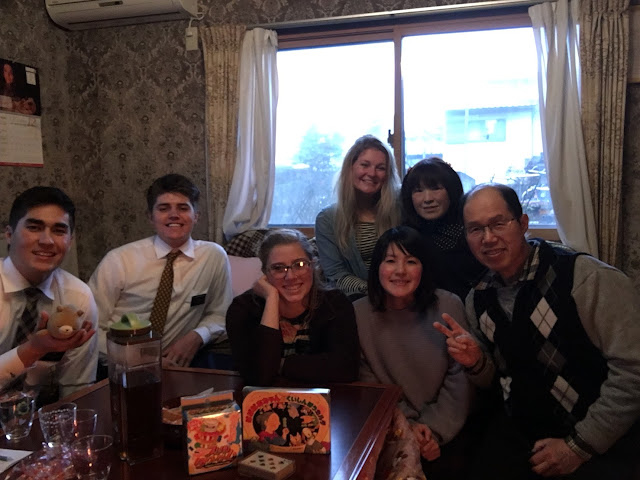 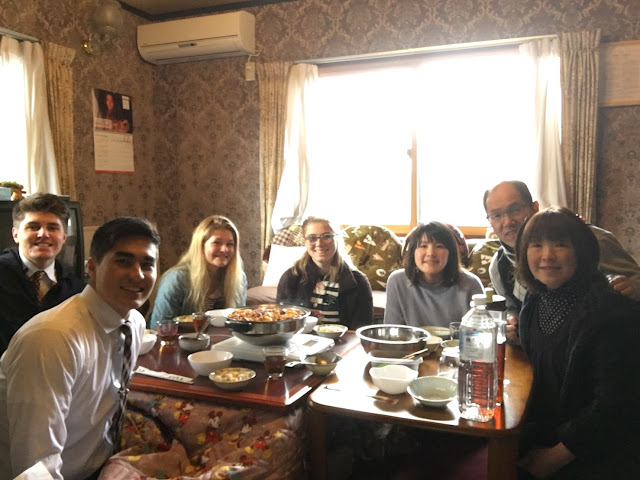 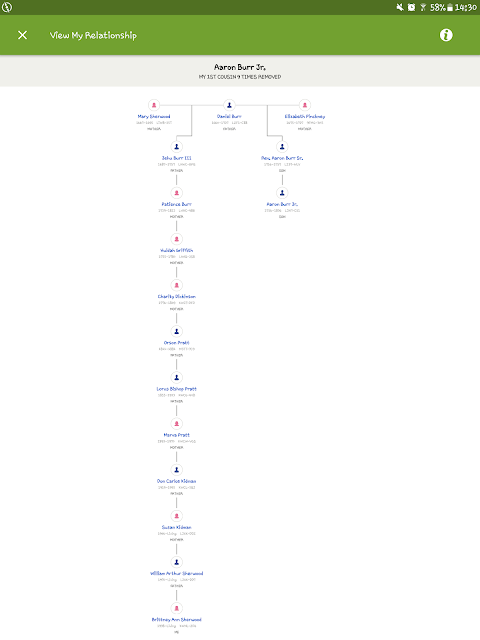 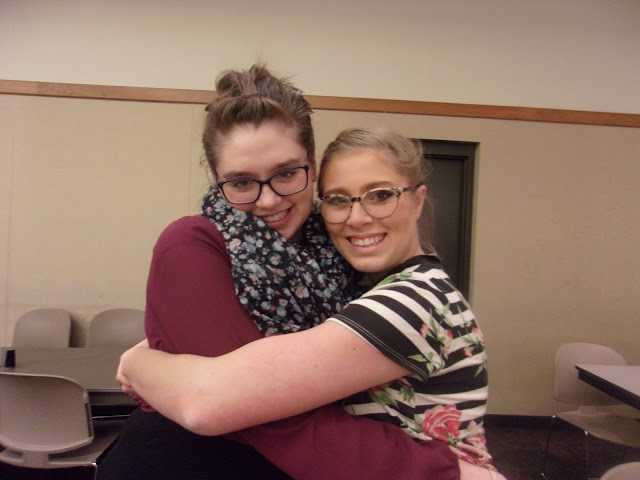 So this past week has been kinda hard to dendo because New Years is like Christmas for Japan. Everyone celebrates for like an entire week. But hey we got to do cool things anyway! We went to Bishop Okunishi's house for lunch and New Years games and it was super fun. I cleaned everyone's clock at the hiragana slap game and won the New Years candy of joy and happiness.

We've also been able to finally set up appointments with people because the holidays are winding down and people's schedules are more free. We're teaching a cute family now, the Osakis, and we're way excited about it.

Also we went up to Kyoto University the other day and met a way brilliant daigakkusei (college student) who's studying civil engineering and who explained to us the intricacies of Buddhist theology. He said that the basic idea is that all laws of nature, rules, etc that keep us from doing things and cause us suffering are there because we put them up in ourselves. Like aliens don't have to follow gravity because humans just decided way way back that we were gonna have gravity. It was way complicated. But he said that while he knows a lot about it, he doesn't really have much faith in it, so we gave him a Book of Mormon and he was like "cool I'll read it if I have time outside of my studies" and then dashed off to catch the bus back into town. It was an interesting conversation.

Today we're making mochi (sticky rice cake) because that's what you do for New Years in Japan and it's way cool! So I don't have a ton of time but I love you all and hope you're having a wonderful start of the year! 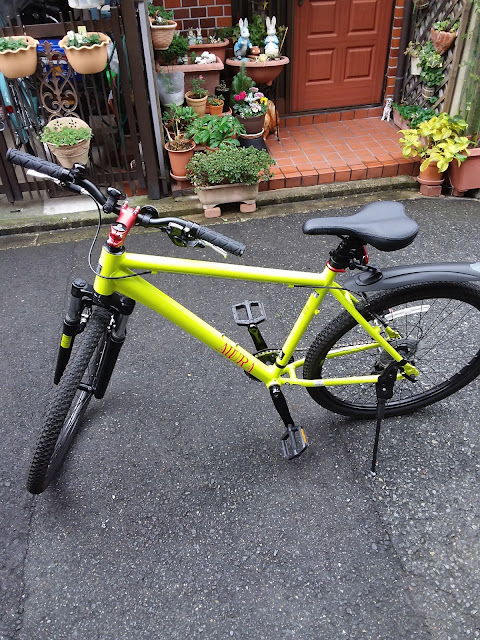 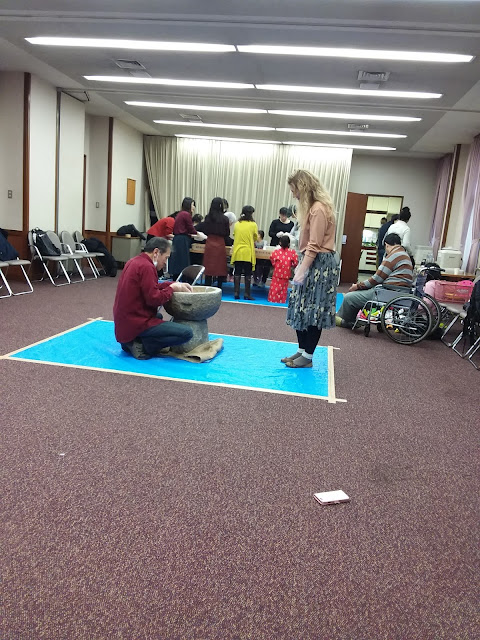 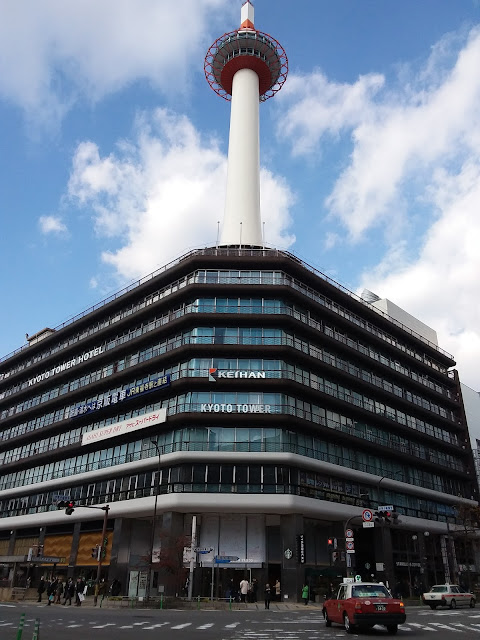